The first parameter is the “main root” and it’s called Fundamental Mother (abbreviated is FM). This is the main tone on which all other tones are calculated. 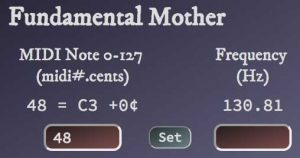 In the note name (e.g. C3), the number (3) indicates the octave in the scientific pitch notation.

You can set the FM in two ways:

Note that you can write decimal values. The decimal mark can be the point [ . ] or comma [ , ]

The MIDI notes follow the standard numbering as ratified in the MIDI specifications.
Click here or the following image to download a useful reference on MIDI note numbering. 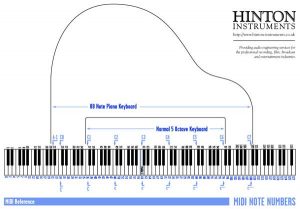 How do I know which number corresponds to the key I’m pressing?
To see what is the MIDI note number of a key (in the standard equal temperament), you can just press it on your keyboard/controller and its number is displayed in the “MIDI Input Monitor” table under “MIDI I/O”. 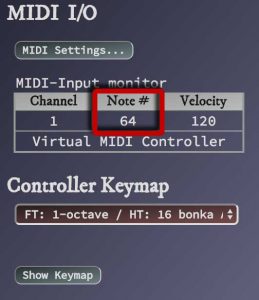 FT are like a palette of tones. They are the red area on the keyboard and when you press a FT key, all the Harmonic Tones on the blue keys are instantly recalculated.

Once you have choosen the tuning system for FTs, the DHC computes 64 FTs above and 64 FTs under the Fundamental Mother. You can choose the FTs you prefer from this full 129-notes FTs Scale and map them into the Controller Keymap in order to obtain a palette of fundamentals. This palette is represented by the red keys on the Virtual MIDI Controller. We can call it Fundamental Palette (FP)

Let’s see how to tune the FTs. 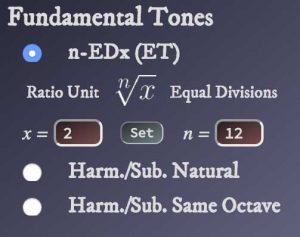 The Tuning System is the method to compute the frequencies of each step of the Fundamental Palette.

Since the “meaning” of the steps is different from one Tuning System to another, each Tuning System should have an ad-hoc Controller Keymap.

The default Tuning System is the “equal temperament“, more specifically the 12-TET, better called 12-EDO, that means 12 equal divisions of the octave. We prefer the EDO suffix because it is more definite and intuitive.

n Equal-Divisions of the ratio x

For example, the classic equal temperament 12-EDO is obtained dividing the ratio/interval 2 by 12 logarithmically equal divisions. In other words, we divide the octave in 12 semitones. Here, n-EDx becomes 12-ED2 .

In the mathematics of music we say: twelfth root of two.

As I said, this is the default tuning system for the FTs palette.

But it is possible to logarithmically divide another interval rather than the octave.

This feature is very useful for microtonal or xenharmonic musicians.

For example we can recreate the equal tempered version of the Bohlen–Pierce scale by dividing a higher fifth (aka tritave) in 13 equal parts. 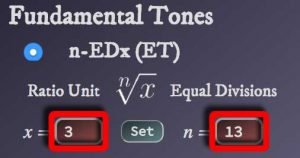 The other Tuning System is based on the Harmonic/Subharmonic series. In this way you can use the tones of an Harmonic (or Subharmonic) Series as a FTs.

The Harmonic/Subharmonic tunings are more complex and they will be explained in an ad-hoc tutorial. They obviously require a specific Controller Keymap file (keymaps for Same Octave transpose). 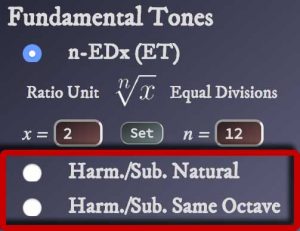 As we have seen before, once you have set the FTs tuning system, you have a 129-tone FTs Scale with witch you can build the Fundamental Palette (the red keys). In order to do so, you have to choice some steps/tones of this FTs Scale and map them by assigning each one to a controller key.

A set of predefined keymaps are available to facilitate the user. The default keymap is structured this way:

FTs: 1 octave (from -7 semitones to +7 semitones relatively to the FM)
HTs: 16 harmonics mapped in “bonka” style.

“Bonka”, “sanga” and “giora” are different ways to map the HTs into the piano keyboard. 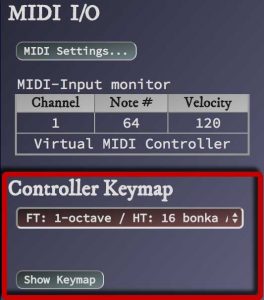 In this table you can see what each key is associated with. In this case the FTs are mapped from the MIDI key number 41 to 55. As I said, a different FTs Tuning System can provide tones with different “meaning” and therefore requires an ad-hoc Controller Keymap.

The structure of the Controller Keymap file will be discussed in a section below.

When you press an FT key, the Harmonic Tones are instantly recalculated in order to follow the Harmonic (or Subharmonic) Series of the pressed FT.

Harmonic Tones can be abbreviated HTs. 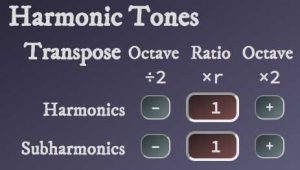 In this box, we can transpose the HTs‘ Harmonic/Subharmonic Series (the blue keys) by octaves or entering a ratio in decimal format.

ALERT: using a free ratio the transposed (sub)harmonics could be not in harmonic ratio with the Fundamental Tone!

Such as the FTs, also the HTs are set/mapped into the Controller Keymap file. In the default keymap shown before, the HTs are mapped from the MIDI key number 56 to 74.

The structure of this file is explained in the next section.

So, let’s open the default preloaded Controller Keymap file to understand how it works. It is like the ctrl_a-7F-16Hp.hcmap in /keymaps/n-edx/ctrl folder.

You can open and edit a key-map file with Notepad, TextEdit or any other text editor that saves in plain text format.

This file defines what keys you want to use on the controller. You can choose a set of keys from your controller and assign a function to each key. In this way you can build a Fundamental-Tone Scale and an Harmonic-Tone Scale. 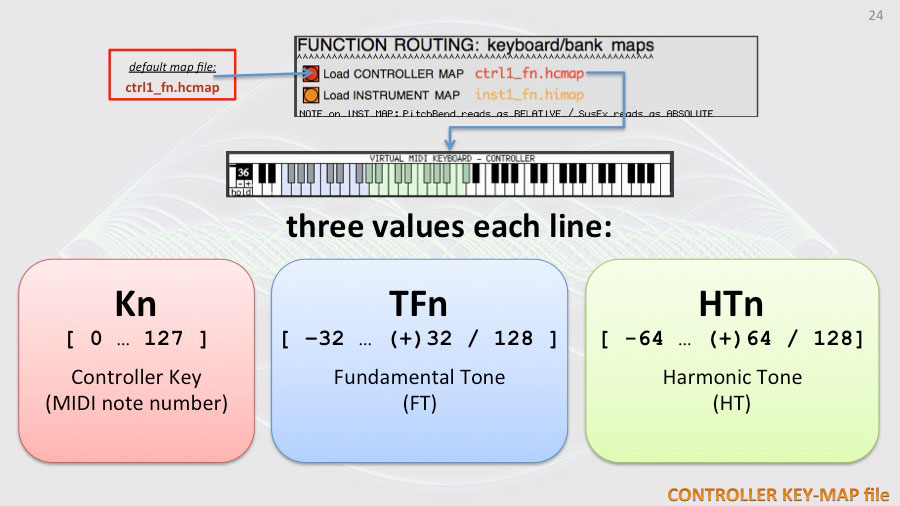 We have three values each line, separated by a single space or tab. Each line is a key on the MIDI controller, with his functions: Fundamental or Harmonic. Value 128 stands for: No function. 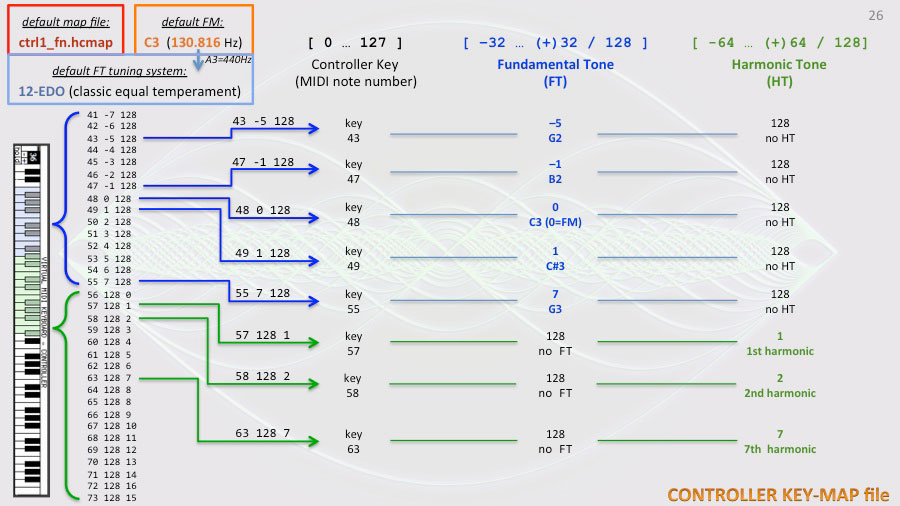 This map can be represented in this way:

Blue keys are FTs and green keys are HTs.

The first value is the MIDI note number of the key you chose to be used on the controller device.

The Harmonync assumes that you have an input MIDI controller. According to the MIDI specifications, a controller can send 128 different notes maximum per channel. They are numbered from 0 to 127. Your controller will use only a portion of these 128 keys. So, you have to choose a comfortable set of keys suitable to your needs.

To see the MIDI note number of a key, you can just press it and you have the number in the MIDI IN NOTE grey area (that’s why it’s so big).

With the second value you can assign a Fundamental Tone function to the controller key.

The Fundamental Tone functions are expressed in values between -32 and +32, including zero.

It is very important to note that the root, that is the Fundamental Mother, is always the Function number ZERO.

If you are using the equal temperament 12-EDO, that divide the octave in twelve so-called “semitones”, these ±32 steps correspond to the semitones. As I previously said, this is the default tuning system for the FTs.

With the default settings, where FM is set to C3 and the FT tuning system is set to 12-EDO, we have:

If you don’t want to assign a Fundamental Tone function to that key, you have to set this second value to 128.

Key by key, you can build your Fundamental-Tone scale.

Finally, with the third value you can assign a Harmonic Tone function to the key.

The Harmonic Tone functions are expressed in values between –64 and +64 including zero. Zero is actually used for a special feature, usable only with the Built-in DSP.

This Harmonics and Sub-Harmonics, are the whole multiple or fraction, of the last pressed Fundamental Tone.

The numbering system of Harmonic Tones is more intuitive. It corresponds to the canonical harmonic or overtone naming.

If you don’t want to assign a Harmonic Tones function to that key, you have to set this third value to 128.

Maybe, you’ve noticed that the Harmonic Tones have a strange order on the default key-map: the keys 64 and 65 have the same function (the 8th harmonic) and the keys 72 and 73 are inverted (key 72 is the 16th harmonic and key 73 is the 15th harmonic). 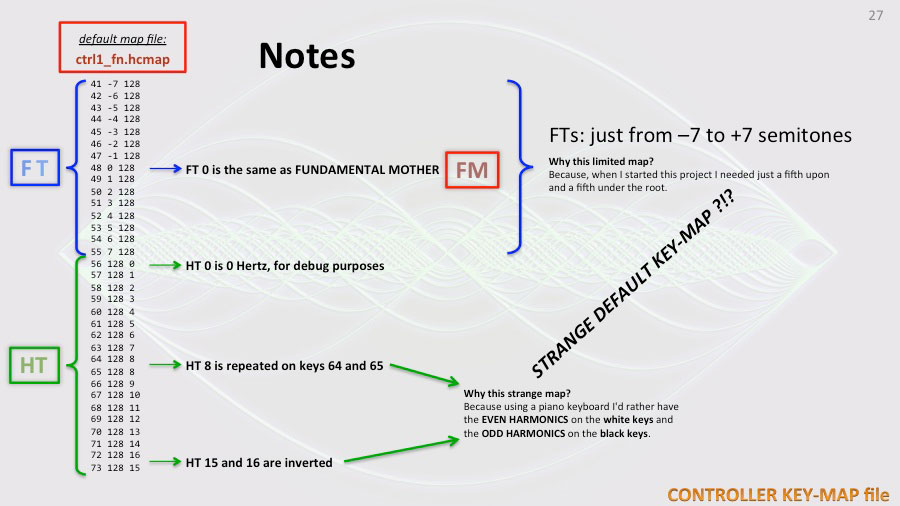 Why this strange map?

The classic piano keyboard, with a pattern that repeats every twelve keys, is not the best solution for playing harmonics. So, the default key-map is my personal solution to divide even and odd harmonics respectively in white and black keys using a piano keyboard.

Also the Fundamental Tone mapping might seem strange: starting from zero, there are just seven keys above and seven below zero. With the default classic equal temperament it means a maximum range of an ascending fifth and a descending fifth from the root (or zero). Why?

This because, when I started this project I needed just a fifth upon and a fifth under the root 😉 .

There is an alternative key-map in the keymaps/ directory. The file is “ctrl2_fn.hcmap“. Other maps will be uploaded soon. In the meantime… if you don’t like the default key-map, you can edit it or create your own.

You must be wondering: why two values to assign a key function?

I’ve never used this possibility and I never checked its proper implementation. Probably, at this stage of development it can result in undesirable effects. I recommend: do not use this possibility yet.

So, to avoid mistakes: 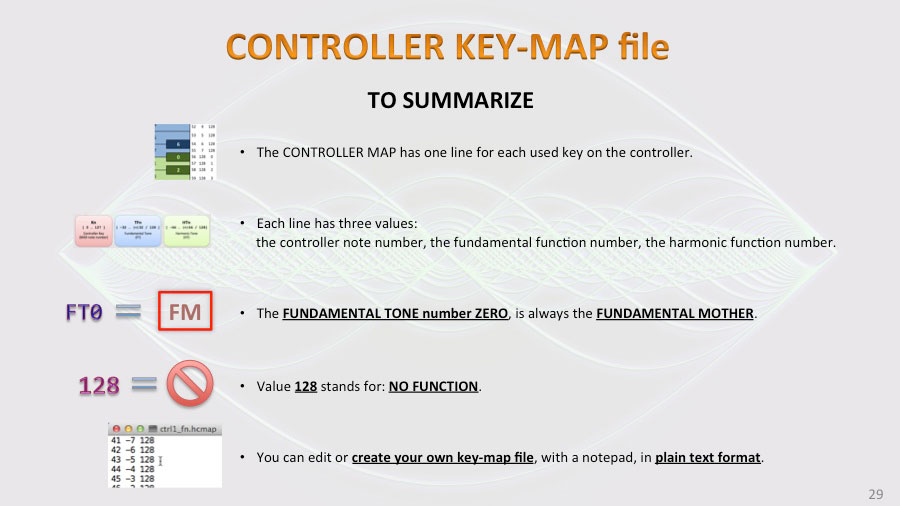 Click on the red button “LOAD CONTROLLER MAP” to open a file-browser window and load a new controller key-map.

The current CONTROLLER KEY-MAP file is written in red. The default one is: ctrl1_fn.hcmap . It is in the “keymaps” directory. There you have an alternative key-map file: /keymaps/ctrl2_fn.hcmap .

Create your own Controller Key-Map

Let’s see how you can create your own key-map. In particular, we are going to re-create the other map you can find in /keymap directory: the file ctrl2_fn.hcmap

Create a keymap is very simple.

First step. Imagine the layout you want to create.

For example, I want two octaves of FT and the first 16 HT. Possibly maintaining the even harmonics on the white keys and the odd harmonics on the black keys. All this should be mapped to a range of 49 keys (or 4 octaves).

An example of this layout is the following:

In the keymap/tools/ directory there is an Excel file, useful to conceive and create a controller keymap. The file is harmonync-keymapping-tool.xlsx . You can find the previous layout in the “layout-maps” worksheet.

Second step. Decide the MIDI key range you want to map your layout to.

For example, in order to use the default key range of my keyboard, I choose the MIDI notes from number 36 to number 81.

You can see the resulting layout:

Note that in this map:

In order to avoid mistakes, you can use the mapping tool in the Excel file.

Switch to the “MAPPER” worksheet. This sheet is protected to avoiding mistakes. You can edit only the second and the third column. However, the sheet is not password protected.

There are seven columns with data. For now, let’s see the first four columns.

* Note that there are some hidden columns.

Fourth step. Copy just the first three columns of the used rows, in this case from 36 to 81, and paste them in a plain text editor. 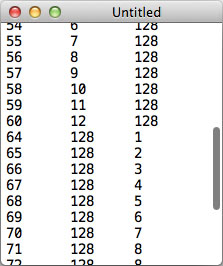 To be sure the file is in plain text, save in TXT format and then rename the extension from .txt to .hcmap .

You can load the new file as we see before.